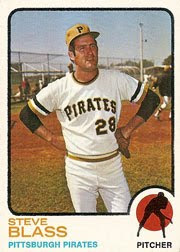 About This Player
Steve Blass enjoyed a ten year career with the Pittsburgh Pirates.  Blass made his Major League debut in 1964 and became a stable in the Pirates' pitching rotation on 1966.  Blass had this finest moment in the 1971 World Series in which he pitched for two complete game victories allowing only seven hits and two earned runs through all 18 innings.  Blass followed in 1972 with his finest season pitching to a 19-8 record, 2.49 ERA, 11 complete games, an All-Star selection and second place in the Cy Young Award vote.

However, Steve Blass might be even more remembered for what followed in the next season.  In 1973, Blass experienced a sudden loss of control of his pitching and was unable to find the plate.  His troubles had coined the term "Steve Blass Disease."  He pitched to a 3-9 record and a ballooning 9.83 ERA that season.  In 1974 after pitching one game, he was sent to the minors and never returned.

For more information on Steve Blass and his pitching troubles:
Sports Illustrated - April 15, 1974

Blass is currently a broadcast announcer for the Pittsburgh Pirates.

About This Card
Steve Blass poses with great confidence after a stellar 1972 season.  Little did he know what would happen the following year. 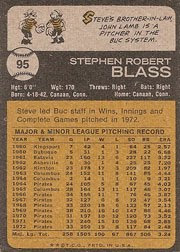