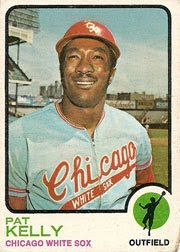 About This Player
Pat Kelly enjoyed 15 seasons in the Major Leagues and six of them with the Chicago White Sox.  Kelly made his Major League debut with the Minnesota Twins in 1967.  Kelly was selected by the Kansas City Royals for the 1969 expansion draft and established himself as a starting right fielder.  Kelly was later traded to the White Sox in 1971 with whom he enjoyed his best seasons.  His time in Chicago also led to his selection for the All-Star Game in 1973.  He would later spend time with the Orioles and Indians.

After his retirement from baseball, Kelly became an ordained minister.  Kelly passed away October 2, 2005 from a heart attack.

About This Card
Pat Kelly poses at Yankee Stadium in the White Sox away blues. 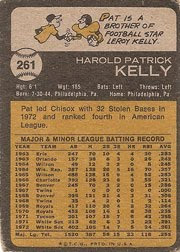