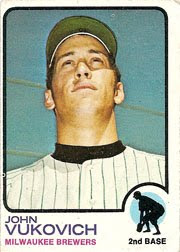 About This Player
John Vukovich enjoyed ten seasons in the Major Leagues and two of them with the Milwaukee Brewers.  Vukovich began and ended his career with the Phillies and played as a utility infielder and later as a coach.

About This Card
Why does this portrait show only the bottom of the bill of his cap?  Vukovich was traded from the Phillies to the Brewers prior to the 1973 season.  In this case, it must have been very convenient to use this photo instead of having to airbrush an "M" logo on his cap.

Also, having made his Major League debut in 1970, Vukovich had not yet been featured on a Topps card until this set. 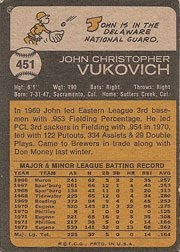