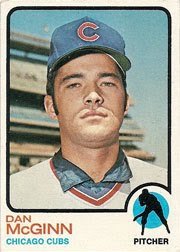 About This Player
Dan McGinn was a left-handed pitcher who enjoyed five seasons in the Major Leagues.  McGinn made his rookie debut in 1968 with the Reds.  McGinn was later drafted by the Expos in the expansion draft and was an inaugural member of the team in 1969.  McGinn also belted the first home run in Expos history on Opening Day that year.  McGinn played his final season with the Cubs in 1972.

About This Card
This 1973 Topps card would be McGinn's final baseball card. 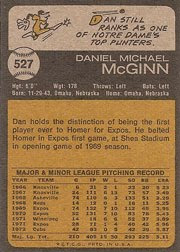