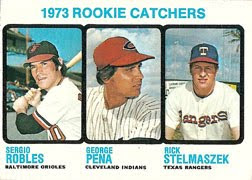 About These Players
Sergio Robles played only 16 games over three seasons.  Robles came to the Orioles as part of a trade that sent Frank Robinson to the Dodgers in 1971.  Robles was called up briefly the Orioles in 1972 and 1973 and again in 1976 for the Dodgers.

George Pena was a career minor league catcher with seven different organizations, but never broke in with a Major League club

Rick Stelmaszek played in three seasons with three different teams starting with the Washington Senators who moved to the Texas Rangers.  Stelmaszek has most of his Major League success as a bullpen coach and is currently in his 30th year as a coach with the Minnesota Twins.

About This Card
Topps included a subset of rookie cards featuring three players.  The rookie cards featuring multiple players had been a regular feature in all of Topps sets to include players who had either appeared briefly in the Major Leagues or were expected to appear.  Add in that these cards only appear in the last series of the 1973 set and these rookie card experience an inflated demand.  Robles and Pena appear on a Topps card for the first time in 1973 while Stelmaszek had appeared in the 1970 Topps set. 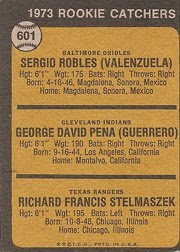