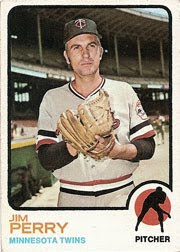 About This Player
Jim Perry pitched 17 seasons in the Major Leagues and ten with the Minnesota Twins.  Perry made his debut in 1959 with the Cleveland Indians and came in second in voting for American League Rookie of the Year.  Perry had his best years after being traded to the Twins in 1963.  In 1970, Perry pitched to an American League leading 24 wins, 3.04 ERA and a Cy Young Award.  Perry was a three-time All-Star and currently ranks 84th all time in wins.

Jim Perry is the brother of Gaylord Perry, who enjoyed a 22 year career and was inducted into the Baseball Hall of Fame in 1991.

About This Card
Although Jim Perry appears as in a Twins uniform in the 1973 set, he was traded to the Detroit Tigers for Danny Fife and cash just before Opening Day that year. 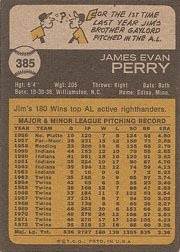