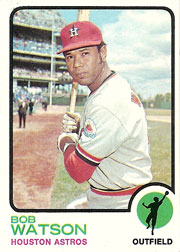 About This Player
Bob Watson played in 19 seasons in the big leagues and his first 14 seasons with the Houston Astros.  Nicknamed "Bull," Watson was original a catcher in the minors but converted to a first baseman and left fielder by the time he made his Major League debut in 1966.  While with the Astros, Watson hit .297, drove in more than 100 runs twice and was selected to the All-Star team twice.  Watson is credited in Major League Baseball history as scoring the 1,000,000th run.  On May 4 at 12:32 PM with Watson on second base, Milt May hit a three-run home at Candlestick Park in San Francisco.  Despite the lack of in-game urgency, Watson sprinted to home plate.  At the same time, the Cincinnati Reds' Dave Concepcion had just hit a home run and Watson scored the 1,000,000th run four seconds before Concepcion reached home plate.

Watson continued to remain in Major League Baseball in the front office.  After the 1993 season, he was named general manager of the Houston Astros, becoming the first African-American to serve as a GM in the Major Leagues.  He also served as the GM for the Yankees in 1996 and 1997.  After retiring as the GM of the Yankees, Watson became Vice President of Rules and On-Field Operations for Major League Baseball.  Watson retired from this post in 2010.

About This Card
The back of Watson's card remarks his highlight as one of four Astros to hit over 20 homers and drive in more than 80 runs in 1972. 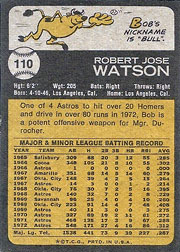