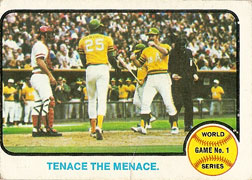 With the series opening at Riverfront Stadium in Cincinnati, the A's would get off to a good start.  Unexpectedly, A's catcher Gene Tenace hit home runs in the second inning and in the fifth inning and drive in all three runs to give the A's a 3-2 victory.  Tenace was the first player ever to hit home runs in his first two plate appearances in a World Series; the feat was later matched by Andruw Jones of the Braves in 1996.

About This Card
The photograph shows Gene Tenace scoring after his first home run in the second inning with George Hendrick waiting to congratulate him at the plate.  Reds catcher, Johnny Bench looks on. 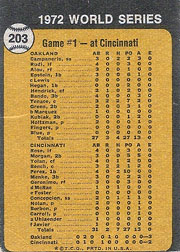