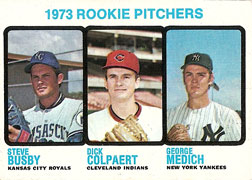 About These Players
Steve Busby enjoyed eight seasons with the Kansas City Royals.  After his debut in 1972, Busby quickly became one of baseball's stars with two All-Star selections, a 20-win season in 1974 and two no-hitters.  However, Busby was diagnosed with a torn rotator cuff in 1976.  He subsequently became the first player to undergo rotator cuff surgery.  While Busby was able to pitch for three more seasons after the surgery, he never regained his previous form and was out of the Majors after 1980.

Dick Colpaert played only one season for the Pittsburgh Pirates.  In 1970, pitched a total of 10-1/3 innings over eight games.  Colpaert was selected by the Cleveland Indians in the 1972 Rule 5 Draft, but never pitched a game for the Tribe.

George Medich spent 11 seasons in the big leagues and four with the New York Yankees.  Better known as "Doc," Medich received his nickname early in his career and while he was a medical student at the University of Pittsburgh.  By the end of his career, Medich played for seven different teams.

About This Card
Busby, Colpaert and Medich all appear for their first times in the 1973 set.  Colpaert appears his only time in a Topps set and not with a team he played with in the Major Leagues. 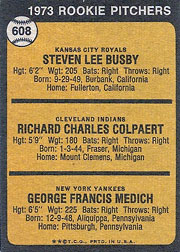