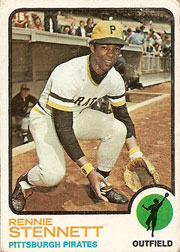 About This Player
Rennie Stennett enjoyed 11 seasons in the Major Leagues and his first nine with the Pittsburgh Pirates.  Stennett made his big league debut in 1971.  As a Pirates, Stennett had been a part of the division winning teams in 1972, 1974 and 1975 and part of the World Series winning team in 1979.

On September 1, 1971 in a game against the Philadelphia Phillies, Stennett started at second base as part of the first all-black starting lineup in the history of Major League Baseball.

Over his first three seasons, Stennett was used primarily as a back up at second base.  In 1974, Stennett earned the starting second base role over Dave Cash and, batting from the leadoff position, responded with a .291 average, 84 runs, 56 RBI, and a career-high 196 hits.

On September 16, 1975, Stennett went 7-for-7 as the Pirates beat the Chicago Cubs 22-0.  Stennett became the only player in the 20th century to hit 7-for-7 in a nine-inning game and the Pirates set the record for the largest winning score in a shutout.

Although known for his defense prowess at second base, in had been having an outstanding season at the plate in 1977.  Stennett had been .336 for the season and has a career high 28 stolen bases before he suffered an injury on August 21, 1977.  Stennett broke his right leg while sliding into second base. He was out for the rest of the year and the injury would hamper his performance through the rest of his career.

After the 1979 season, the Giant signed Stennett as a free agent.  After two years, Stennett was released.

About This Card
Rennie Stennett is listed on the card as an outfielder.  In 1972, Stennett played 41 games in the outfield.  However, he played 49 games at second base.  Stennett would later become the club's regular second baseman. 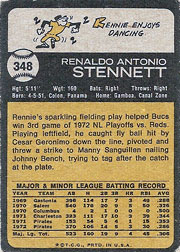