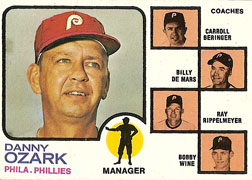 About This Manager
Danny Ozark spent eight seasons as a Major League manager and seven of them with the Philadelphia Phillies from 1973 to 1979.  Before arriving to the big leagues, Ozark spent 19 seasons in the Dodgers' minor league system.  Ozark joined the Los Angeles Dodgers in 1965 as a coach on Walter Alson's staff and served for eight seasons until he was hired to manage the Phillies.

Ozark was hired by the Phillies in 1973 and took over a team that was in last place the previous season.  Ozark led the team to a last place finish in 1973, but improved the ball club in the following years.  Ozark led the Phillies team that included Mike Schmidt and Steve Carlton in 1976 to a club record 101 wins and to three straight first place finishes in the National League East from 1976 to 1978.  However, the Phillies would lose in three straight NLCS to the Los Angeles Dodgers.  The Phillies acquired Pete Rose for the 1979 season, but a disappointing record led to Ozark's dismissal on August 31 of that year.

Ozark would again become a Major League manager in 1984 taking over the Giants after Frank Robinson's dismissal. 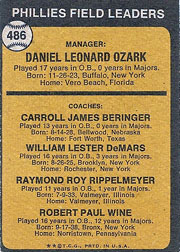