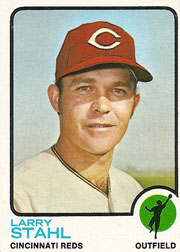 About This Player
Larry Stahl played in ten Major League seasons as a back up outfielder and pinch hitter.  Stahl made his big league debut with the Kansas City Athletics in 1964.  He would later play for the New York Mets and San Diego Padres and spend his final season with the Cincinnati Reds.  Stahl finished his career with the 1973 National League Championship Series in which he hit 2-for-4 as a pinch hitter in the series loss to the Mets.

Stahl, while with the Padres, might be best known for his part in breaking up a perfect game against Milt Pappas of the Cubs.  September 2, 1972, after retiring the first 26 batters, Stahl is brought in to pinch hit against Pappas.  After two strikes calls, the home plate umpire calls the next four pitches balls and Stahl is walked.  The following batter is retired on a pop-up leaving Pappas with a no-hitter.

About This Card
The illustration on the back of Stahl's card highlights his 503 foot home run hit at Municipal Stadium in Kansas City in 1966.  To add more to details of the dimensions in Municipal Stadium, A's owner Charlie Finley had a tendency to experiment with moving the fences in and out during the seven seasons the A's resided in Kansas City.


In KANSAS CITY (4-3) there is a 40-foot screen atop the fence to frustrate sluggers, but Larry Stahl hit a 503-foot homer and Ken Harrelson hit one 425 feet, giving the team a total of three at home for the season. - Sports Illustrated: May 23, 1966 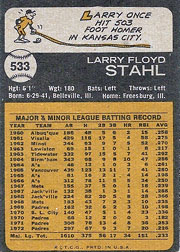