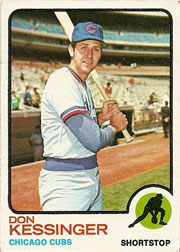 About This Player
Don Kessinger played 16 seasons in the Major Leagues and his first 12 with the Chicago Cubs.  Kessinger made his big league debut in 1964.  He established himself quickly as the team's starting shortstop in 1965 and played the first of nine consecutive seasons in which he would share the middle infield tandem with second baseman, Glenn Beckert.  During his tenure with the Cubs, Kessinger earned six All-Star selections, including four in the starting lineup.  Regarded as one of the game's best defensive specialists during his time, Kessinger led the National League in assists three times and received two Gold Glove Awards.  In 1969, he set a Major League record at that time with a streak of 54 consecutive games at shortstop without committing an error.

After the 1975 season, Kessinger was traded to the St. Louis Cardinals.  After one-and-a-half seasons with the Cardinals, he was traded again to the Chicago White Sox, with whom he would finish his career.  In 1979, Kessinger was named the White Sox' player-manager and served in this role until his retirement on July 31.

Kessinger's son, Keith, played briefly for the Cincinnati Reds in 1993.

About This Card
Don Kessinger is shown here in his "lefty" pose.  As an accomplished switch-hitter, Kessinger can be seen on Topps cards in both "left" and "righty" poses.  After hitting .201 in 1965, Cubs' manager, Leo Durocher, encouraged Kessinger to become a switch hitter.  His batting average improved greatly and Kessinger soon became the Cubs' lead off hitter in Durocher's lineup. 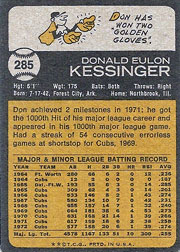