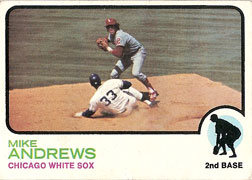 About This Player
Mike Andrews enjoyed eight seasons in the Major Leagues and three seasons with the Chicago White Sox.  Andrews made his big league debut with the Red Sox in 1966.  The following year, he became the team's starting second baseman and led the American League in sacrifice hits.  He also earned an All-Star selection in 1969.

After five seasons in Boston, Andrews was traded along with Luis Alvarado to Chicago for Luis Aparicio.  Andrews immediately became the White Sox' regular second baseman in 1971.  The following year, Andrews began to decline defensively as he struggled with a bad back.  In 1973, Andrews started the season as the White Sox' first designated hitter.  While he could no longer play regularly in the field, he struggled at the plate and was released in the middle of the season.

July 31, 1973, Andrews was signed as a free agent by the Oakland A's at the request of A's manager and former Red Sox coach, Dick Williams.  Andrews was part of the A's postseason roster for the 1973 World Series.  In Game 2 of the series, Andrews entered the game in the 8th inning as a pinch hitter and took over at second base.  In the 12th inning of that game, Andrews committed two errors which led to a Mets' victory.  A's owner, Charlie Finley, forced Andrews to sign a statement after the game to declare himself disabled and, thus, uneligible for the remainder of the series.  With his teammates and manager, Dick Williams, rallying in his defense, baseball commissioner Bowie Kuhn force Finley to reinstate Andrews.  Andrews pinch hit in the 8th inning of Game 4, which became his final plate appearance in the Major Leagues.

Andrews played one season of baseball in Japan before retiring.

Andrews had served more than 30 years chairman of the Jimmy Fund of the Dana-Farber Cancer Institute.  Andrews has been involved with the Jimmy Fund since his days with the Red Sox and helped raise money for research and treatment for adult and childhood cancers.  Andrews stepped down from his role as chairman in 2009.

About This Card
Mike Andrews is shown in this photograph turning a double play.  Not sure who #33 is sliding into second.  The consensus on Chris Stufflestreet's 1973 Topps Photography blog seems to be the Royals' Bob Oliver at a spring training game. 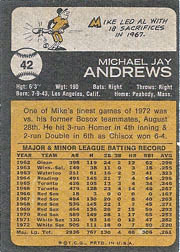