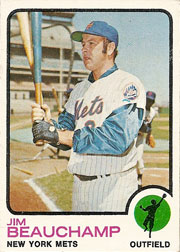 About This Player
Jim Beauchamp played in ten Major League seasons and his final two seasons with the New York Mets.  Beauchamp made his big league debut with the Cardinals in 1963.  Beachamp also spent time with the Astros, Braves and Reds.  During his time with the Mets, Beauchamp served primarily as a pinch hitter and backup first baseman.  His playing career ended in the 1973 World Series in which he went hitless in four pinch-hit appearances.

Beauchamp died on December 25, 2007 after a long battle with leukemia. 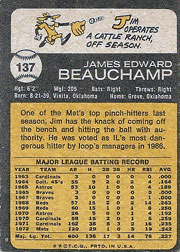