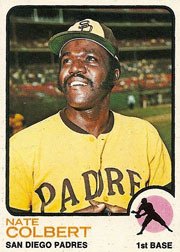 About This Player
Nate Colbert enjoyed ten years in the Major Leagues and six of them with the San Diego Padres.  Colbert made his big league debut with the Houston Astros in 1966.  He played very briefly in 1966 and 1968.  However, Colbert established himself as a Major League starter after he was selected by the Padres in the expansion draft and named the starting first baseman.  Colbert responded with five seasons with more than 20 home runs, four seasons with more than 80 RBI and three All-Star selections.  Colbert still holds the Padres club record for home runs with 163.

After the 1974 season, Colbert was traded to the Detroit Tigers.  He would eventually play for the Montreal Expos and the Oakland A's before back problems forced his retirement at age 30.

About This Card
Starting from the Padres' inaugural season, Nate Colbert had been the face of the franchise and this photograph shows that clearly.  After being traded in 1974, the franchise spotlight fell to future Hall of Famer, Dave Winfield. 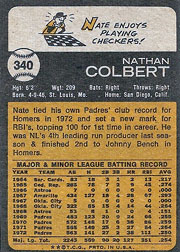