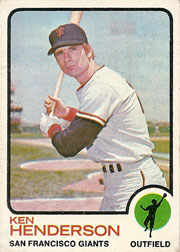 About This Player
Ken Henderson enjoy 16 seasons in the Major Leagues and eight of them with the San Francisco Giants.  Henderson made his big league debut in 1965. Upon his arrival to the big leagues, Henderson had received comparisons from the media to Willie Mays, who was 34 at the time, with some looking to him as the heir apparent in center field.  However, Henderson spent the next few years bouncing up and down from Triple-A and Mays continued to produce and win MVPs.  Henderson became a Giants regular in 1969 with the starting left field spot with Mays and Bobby Bonds patrolling the rest of the outfield.


The press started to build me up pretty heavily, and the thing that they used to write quite often was that I was the next Willie Mays, which I don’t think was the right thing to do. I don’t care if a player is black or white, it doesn’t make any difference, there was nobody that could replace Willie Mays. He was just one player in our generation that nobody could replace. - Ken Henderson

Henderson was traded prior to the 1973 season, along with Steve Stone, to the White Sox for Tom Bradley.  Henderson would have his finest season in 1974 in which he played all 162 games in center field and hit .292 with 20 home runs and 95 RBI.  After three seasons in Chicago, Henderson would bounce around with the Braves, Rangers, Mets, Reds and Cubs before playing his final game in 1980.

After spending 30 years in sales and marketing, Henderson would return to the Giants in 2010 as a sales manager.

About This Card
Despite a broken thumb, as depicted in the cartoon, Henderson managed to play in 141 games, his third most, that season. 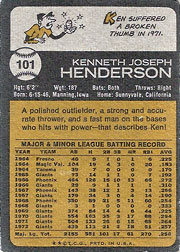