About This Player
Billy Parker played very briefly in three seasons with the California Angels.  Parker made his Major League debut on September 8, 1971 and hit the game-winning home run.  He would play briefly on the big league roster from 1971 through 1973 while spending the majority of those seasons with Triple-A Salt Lake City.  Parker was selected by the Yankees as a Rule 5 pick in 1974, but never made it back to the big leagues.

After his professional career in baseball, Parker worked in home construction and later with youth sports programs in Surprise, Arizona.  The city of Surprise named its baseball field as The Billy Parker Field in 2002.  Parker passed away February 9, 2003.

About This Card
Billy Parker would only have two Topps cards, his rookie card in 1972 and this card. 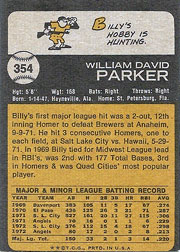