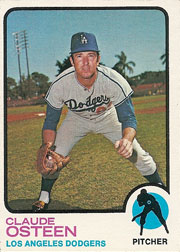 About This Player
Claude Osteen pitched 18 seasons for six different teams.  Osteen made his Major League debut with the Reds in 1957.  However, the greatest portion of his career was spent with the Dodgers.  During his nine seasons in Los Angeles, Osteen won 20 games twice and was selected to the All-Star Game three times.  Showing himself to be a workhorse, about one third of his games were complete games and a third of those were shutouts.  He proved his value in two World Series with an 0.86 ERA in 21 innings, including a complete game shutout in Game 3 of the 1965 World Series against the Minnesota Twins.

About This Card
Osteen received the nickname "Gomer" due to his resemblance to Gomer Pyle from the TV series.  Do you see a resemblance? 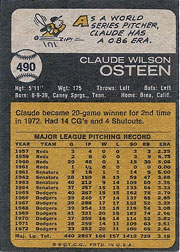