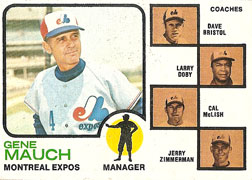 About This Manager
Gene Mauch spent 26 seasons as a Major League manager with four different teams. After Mauch ended a nine-year playing career in 1975, he went on to manage the Minneapolis Millers, the Triple-A affiliate in the Red Sox organization.  In 1960, Mauch got his first big league managerial position with the Phillies after taking over for Eddie Sawyer, who resigned from the club after the opening game of the season.  After nine seasons with the Phillies, Mauch went on to become the expansion club Expos' first manager in 1969 and remain there for seven seasons.  Mauch went on to manage the Twins from 1976 to 1980 and the Angels in 1981 and 1982 and again from 1985 to 1987.

Mauch was a strong advocate for "small ball," which emphasized defense, speed and base-to-base tactics rather than power hitting.

Mauch is regarded as the winningest manager to never win a league pennant.  His 1964 Phillies finished in 2nd place in the National League and only one game back from the Cardinals.  His Angels teams in 1982 and 1986 won the American League West, but both lost in the ALCS.

About This Card
In addition to Gene Mauch, this card also features Dave Bristol (former Reds and Brewers who would later manage the Braves and Giants), Larry Doby (the first African-American to play in the American League), Cal McLish (former All-Star pitcher of 15 seasons) and Jerry Zimmerman (former Reds and Twins catcher). 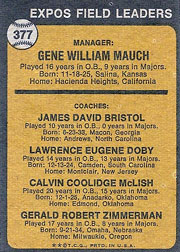