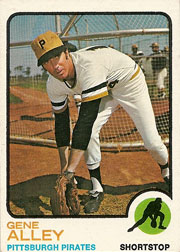 About This Player
Gene Alley enjoyed his entire 12 year career as a shortstop for the Pittsburgh Pirates.  Alley was known as a player who did all of the little things well.  He was a good base runner, sacrificed runners on cue, a dependable hit-and-run man and was outstanding in the field.  Over his career, Alley won two Gold Gloves and played on two All-Star teams, including a start in the 1976 All-Star Game.  With Hall of Fame second baseman Bill Mazeroski, they set a Major League record for most double plays (161) turned by a duo in 1966.  Alley was also a part of Pirates team that won the World Series in 1971.


"Baseball is a team sport and meant to be played like a team. You give yourself up for the sake of the team -- sacrificing men around, moving the runners up so that you can score runs to win games. It's not always based on how many home runs you hit or how much you hit for average. It's did you hit the guy from second to third so the next guy can drive him in with a fly ball and win a game?" - Gene Alley

About This Card
With this card being in the final series, I wonder if Gene Alley almost didn't make it in the Topps set in 1973.  Alley only played in 76 games in 1973 and missed most of the season from shoulder and knee injuries.  1973 would be Alley's final season. 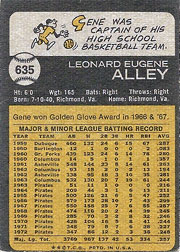