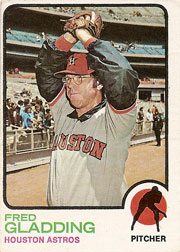 About This Player
Fred Gladding enjoyed 13 seasons pitching relief for the Detroit Tigers and Houston Astros.  Gladding made his big league debut with the Tigers in 1961 and became of heart of the bullpen staff.  Gladding still holds a franchise record of a .703 winning percentage for pitchers with over 200 innings.  After seven seasons and his best season as a Tigers, Gladding was sent to the Astros to complete the Tigers' earlier acquisition of Eddie Mathews.  After missing most of the 1968 season, Gladding led the National League with 29 saves in 1969.  Gladding still remains in third place in the Astros' all-time saves list with 109.  After six seasons with the Astros, Gladding was released.

About This Card
This card is Gladding's last Topps card. 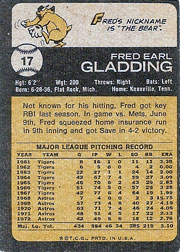