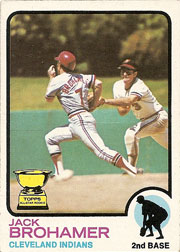 About This Player
Jack Brohamer enjoyed eight seasons in the Major Leagues.  Brohamer made his big league debut with the Indians in 1972 and made an impact immediately and earning the starting job at second base.  Brohamer was even selected as the second baseman for the 1972 Topps All-Rookie Team.  However, his playing time would soon decline.  Brohamer eventually lost the starting job to Duane Kuiper in 1975 and was later traded to the White Sox after the season for Larvell Blanks.  Brohamer started the majority of his games in 1976 at second, but was used in a utility role the following year.  Brohamer later signed with the Red Sox and ended back up with the Indians before finishing his career.

About This Card
Brohamer appears to be tagged out by Orioles' second baseman, Bobby Grich.  (Of course, this is how a player would like to be immortalized on a Topps card.)  May 28, 1972, Brohamer hit 2-for-4 with a run scored.  In the third inning of that game, Indians' center fielder, Tommy McCraw, grounds to Grich, who tags out Brohamer and throws to Boog Powell at first to complete the double play. 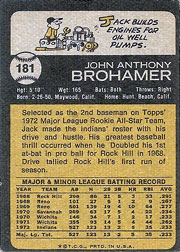