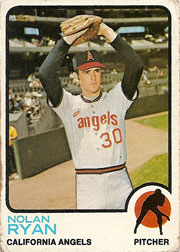 About This Player
Nolan Ryan pitched in 27 seasons, the most from any one player, with four different teams.  One of the most prolific players in baseball history, Ryan holds the record for career strikeouts (5,714 K's) and single season strikeouts (383 K's in 1973), as well as career walks (2,795 BB's) and is the all-time leader in no-hitters (seven total and three more than any other pitcher.)  Dubbed the "Ryan Express," Ryan had been selected to eight All-Star Games, including a start in 1979.  Ryan was also inducted into the Baseball Hall of Fame in 1999 and is the only player to have his number retired by three teams.

Ryan made his Major League debut with the New York Mets in 1966.  Ryan earned a regular spot on the Mets' roster, but was used as a spot starter and reliever. Ryan was also a member of the 1969 Mets team that won the World Series and pitched 2-1/3 shutout innings in Game 3 for the save.  However, Ryan struggled during his time with the Mets and eventually requested a trade.

The California Angels traded for Ryan prior to the 1972 season.  Ryan was given an opportunity to start and he responded with an American League leading 329 strikeouts that year, the first right-handed pitcher to throw more than 300 strikeouts since Bob Feller did in 1946.  In 1973, Ryan broke Sandy Koufax's single-season record with 383 strikeouts.  He also threw his first two no-hitters that year.  Ryan would go on to pitch two more no-hitters and lead the American League four more times during his tenure with the Angels.

Ryan joined the Texas Rangers in 1989 threw more than 300 strikeouts for the sixth time to lead the American League and would tally his 5,000 career strikeout (striking out A's outfielder, Rickey Henderson.)  In 1990, Ryan threw his sixth no-hitter and earned his 300th win.  In 1991, on the day that Rickey Henderson would break Lou Brock's all-time stolen base record, Ryan would throw the seventh no-hitter of his career.  Ryan would throw his last pitch on September 22, 1993 at the age of 46.

About This Card
The back of the card regards Ryan as the "4th greatest strikeout hurler in modern baseball" citing his strikeout total in 1972 and the comparison with Feller, Koufax and Rube Wadell.

Nolan Ryan is one of two players from the 1973 set who appears in his regular-issue Topps card as late as 1994.  (Charlie Hough also appeared in the 1994 Topps set.) 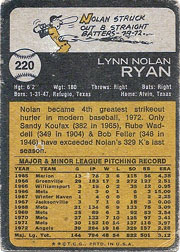