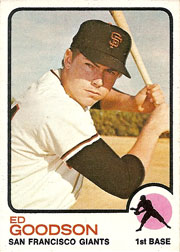 About This Player
Ed Goodson played in eight seasons in the Major Leagues and six of those with the San Francisco Giants.  Goodson was drafted by the Giants in 1968 and made his big league debut in 1970.  Used primarily as a bench hitter and a backup first baseman and third baseman throughout his career, Goodson had his finest season in 1973 in which he started 93 games at third base and hit .302 with 12 HR and 53 RBI.  Goodson was traded to the Braves in 1975 and later traded the following year to the Dodgers, with whom he would play his last two seasons.

About This Card
Despite having played in three seasons previously, Goodson was featured on a Topps card for the first time in 1973. 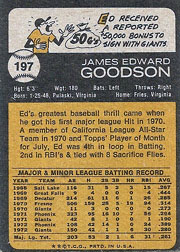