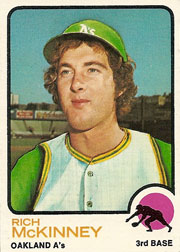 About This Player
Rich McKinney spent parts of seven seasons as a pinch hitter and backup third baseman and second baseman in the Major Leagues from 1970 through 1977.  McKinney was drafted by the White Sox in 1968 and made his big league debut in 1970.  The great majority of his career was spent bouncing in and out of the minors.  However, McKinney spent the entire 1971 season on the White Sox roster and hit .273 with 8 HR and 46 RBI.  The following year, McKinney was traded to the Yankees for Stan Bahnsen.  He was traded a year later to the A's to complete a deal that sent Matty Alou to the New York.  McKinney played in Oakland until his final game in 1977.

About This Card
Probably the worst airbrushing job out of the set, McKinney's card features a painted-on uniform and a an A's cap with hair showing up over the top.  I might be wrong, but it appears McKinney was pictured originally without a cap and Topps painted one on top. 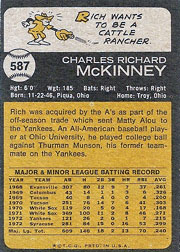