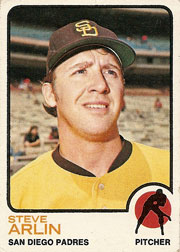 About This Player
Steve Arlin enjoyed a brief six-year career in the Major Leagues.  Arlin was drafted by the Phillies, but was selected by the Padres in the 1969 expansion draft.  Arlin made his big league debut in 1969 and became a regular in the pitching rotation in 1971.  Despite respectable ERAs in 1971 and 1972, Arlin led the National Leagues in losses in both seasons.  He also led in walks and wild pitches in 1972.  His performance in 1972 was even more curious considering that Arlin pitched a one-hitter, three two-hitters and a 10-inning performance in which he allowed only one hit.  Arlin was traded to the Indians in the middle of the 1974 season and finished his career there.

About This Card
As the cartoon states, Arlin practiced dentistry during this career.  After his baseball retirement, Arlin became a dentist. 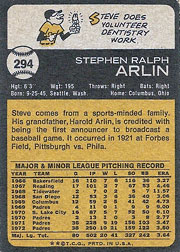