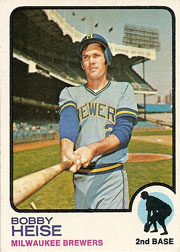 About This Player
Bob Heise played in 11 big league seasons with seven different teams.  Heise made his Major League debut as a September call up in 1967 with the Mets and would only join the big league club the following two years as a September call up.  After being traded to the Giants in 1970, Heise earned a spot on the big league roster as a utility infielder.  He would hit the only home run of his career off of Danny Combs in 1970.  Heise would have his greatest playing time with the Brewers after a trade in the middle of the 1971 season.  Heise had a career high in games and plate appearances in 1972.  Heise would later see playing time with the Cardinals, Angels, Red Sox and Royals.

After his retirement in 1977, Heise went on to serve as a police officer for 25 years.

About This Card
While Topps referred to Heise as "Bobby", he was better known as "Bob". 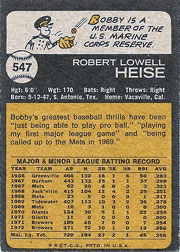