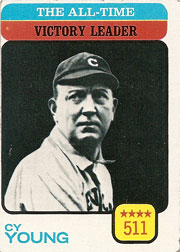 About This Player
Cy Young enjoyed an illustrious 22-year career with five different teams from 1890 through 1911.  As one of the pioneers of modern baseball, Young still holds an extensive list of records that will never be matched, including wins (as well as losses), games started, complete games, and inning pitched.

Young holds the Major League record for victories at 511, a record that will never be broken.  Walter Johnson is second on the victories list with 417 wins and Tim Wakefield, age 44, is the current leader among active players with 195 wins.

Young was elected to the Hall of Fame in 1937.  In 1966, one year after Young's death, the Cy Young Award was created to honor the league's top pitcher.

About This Card
Eight of the top ten still remain in the top ten today.  Since 1973, Greg Maddux and Roger Clemens have moved into the top ten, supplanting John Clarkson and Eddie Plank off of the list. 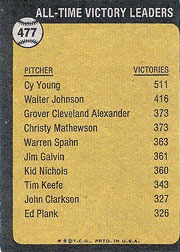