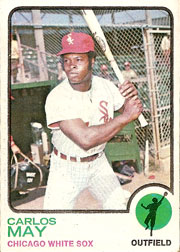 About This Player
Carlos May spent ten seasons in the Major Leagues and nine of them with the Chicago White Sox.  May made his big league debut in 1968.  He came third in American League Rookie of the Year voting in 1969 despite missing a good part of his season from an injury, blowing off part of his thumb, in the Marine Reserves.  The injury threatened to end his career, but May was back by Opening Day the following year and started right where he left off.

May describes his experience in the book, What It Means To Be A White Sox:

"For my service, I had to go in one weekend a month, then there was a two-week summer camp. That year, I was at Camp Pendleton. It was August 11 and we were out on the range. The night before, everybody had been drinking beer. We had some hot Budweiser and I'll never forget it. I couldn't sleep, because they had tarantulas running around there. There were spiders and there was no way I was going to sleep, so I stayed up all night. The next morning, we had a six-round volley, which means six mortars all fire at the same time. I was the assistant ammo guy, so I was loading. The guys up on top of the hill had been drinking the night before and they didn't spot my round and didn't say if it hit. We had to go back and the order came down to clean the guns. As the assistant gunner, it was my job to clean them. I had a big, long iron rod with oil and swabbing rags on it to clean the barrel. My round was still in there and hadn't gone all the way down so when I got the swab, I forced it in there and my round pushed down to the firing pin and went off. I think it was the rod shot back up that took off part of my thumb. I was lucky, though. God was with me.I thought about baseball and I didn't know if I would ever play again. They told me if an infection set in, they might have to take my whole thumb off. God was with me and they didn't have to. I kept my thumb and I rehabbed all I could out there. They did a great job for me. I must have had four or five operations, but I came back and played the next year. It was a humbling experience."

"When I got to home plate my first game back, the people gave me a standing ovation and I cried at home plate. It was awesome. It was a thrill just to be back in the big leagues. I think I got a hit that day, but the big thing was to be back. I wasn't sure I'd ever play again, but it worked out. I was honored to be Comeback Player of the Year and I earned it. They didn't give me anything. I hit .285 and had a pretty good year." - Carlos May from What It Means To Be A White Sox by Bob Vorland

During his tenure with the White Sox, May was selected to the All-Star Game in 1969 and 1972.  While the majority of his time was spent in left field, May would spend 1973 as the starting first baseman for the only time in his career; he would move back to left field after the White Sox acquired Dick Allen.

May would finally see postseason action in 1976 after he was traded to the Yankees in mid-season.  May was traded again in mid-season the following year to the Angels with whom he played his final Major League game.

About This Card
I would have liked to have seen a picture of Carlos May from the back on this card or any other Topps card.  May has the distinction of being the only MLB player to wear his birthday on his jersey: MAY 17. 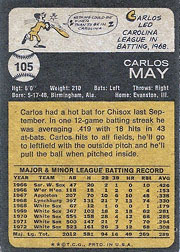