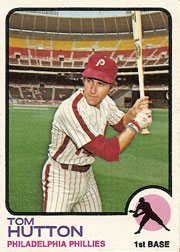 About This Player
Tom Hutton played in 12 big leagues seasons and six of them with the Philadelphia Phillies.  Hutton spent seven years in the Dodgers' minor league system, where he was a two-time minor league MVP, with brief call ups in 1966 and 1969.  Hutton was later traded to the Phillies for Larry Hisle and moved straight to the Major League roster in 1972.  Hutton was a reserve first baseman, emergency outfielder and left-handed pinch hitter, although he might be best known for his uncanny ability to hit off of perennial Cy Young Award winner and Hall of Famer, Tom Seaver; in 62 plate appearances against Seaver, Hutton hit .320 with three home runs, 11 RBI and 11 walks.  After six seasons, Hutton played half of a season with the Blue Jays and finished his last four seasons with the Expos.

Hutton went into broadcasting after his playing career ended and currently works at the Florida Marlins' color analyst.

About This Card
Hutton is seen here in a fairly new Veterans Stadium.  The Phillies played their first game in Veterans Stadium in 1971 and would play there for 33 seasons before moving to their current ballpark, Citizens Bank Park. 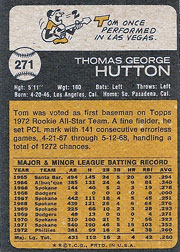