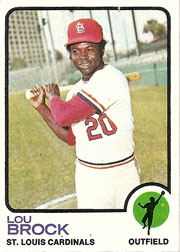 About This Player
Lou Brock enjoyed 19 seasons in the Major Leagues.  Brock made his big league debut in 1961 with the Cubs.  Brock established himself as a starting outfielder the following year.  However, Brock set himself apart as one of baseball's elite superstars after he was traded to the Cardinals in the middle of the 1964 season.  As a Cardinal, Brock was selected to the All-Star Game six times; he started twice in left field in 1967 and 1975.

Brock was had a career of solid hitting.  Brock has a ten-year span of getting at least 180 hits in a season.  He also led the National League in doubles and triples in 1968.  Brock became the 14th player to get 3,000 hits in his career; his milestone hit came against his former team, the Chicago Cubs.

After retiring from baseball in 1979, Brock's number 20 was retired by the St. Louis Cardinals.  In 1985, he was elected to the Baseball Hall of Fame.

About This Card
A classic shot of Lou Brock at the old Busch Stadium in St. Louis. 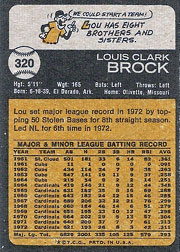