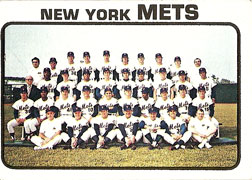 About This Team
The New York Mets were first established in 1962 as part of a National League expansion, along with the Houston Astros.  The Mets played their first two seasons in the Polo Grounds.  They moved into Shea Stadium in 1964 where they would play for another 45 seasons.  The Mets were abysmal early in their existence with finishing in 9th or 10th place in their first seven seasons.  However, the 1969 "Miracle Mets" shocked all of baseball by winning the league championship and then the World Series.  The Mets continued to remain competitive for a few years after.  The Mets would reach the World Series for a second time in 1973, but lose in seven games to the Oakland A's.

About This Card
This card looks to me as abysmal as the Mets' first seven seasons.  The Mets team card use black type with the black border.  Not sure if it is just my card, but the Mets' blue looks all black in the photo. 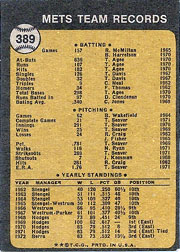