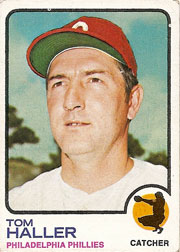 About This Player
Tom Haller played 12 seasons as a  Major League catcher.  Haller was signed as an amateur free agent with the Giants and made his big league debut in 1961.  He split about equal catching time Ed Bailey for the next two years.  In the 1962 World Series, Haller started four games, which include a home run and three RBI, in the series loss to the Yankees.  After Bailey was traded in 1964, Haller was established as the team's primary catcher.  In 1966, Haller hit 27 home runs, a Giants record for catchers, and was also selected to his first All-Star Game.  Haller would be an All-Star again the following year.

After seven seasons with the Giants, Haller was traded to the Dodgers in 1968 and would be selected again as an All-Star.  As a Dodger, Haller would hit .285 in 1968 and .286 in 1970, his two highest batting averages, and lead the National League in sacrifice hits.  Haller, also known for his defensive proficiency, would also lead the league in caught steals.
After four seasons with the Dodgers, Haller was traded to the Tigers in 1972 and would serve as the backup to Bill Freehan.  In one game that season, Haller would start the game at catcher while his brother and American League umpire, Bill Haller, would call the game.

A capable defensive catcher, he ended his career with a respectable .992 fielding percentage, which at the time of his retirement, was second only to the .993 career record of Elston Howard.

After his playing career ended, Haller worked for the Giants as a coach and later became vice president of baseball operations.  He was named to the Giants' 25th anniversary team in 1982.  After a long illness, Haller died November 26, 2004 at the age of 67. 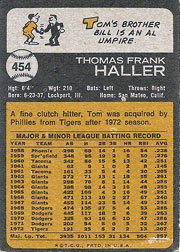