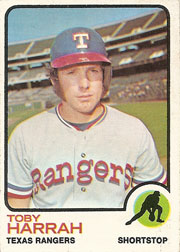 About This Player
Toby Harrah played 17 seasons in the big leagues with the Rangers, Indians and Yankees.  Harrah was signed as a minor league free agent by the Philadelphia Phillies, but later traded to the Washington Senators and made his Major League debut in 1969.  Harrah had established himself as the team's starting second baseman in 1971 and moved with the team when they became the Texas Rangers.  In 1972, Harrah earned his first All-Star selection, but could not play because of injury.  Harrah also earned an All-Star selection in 1975 and a start at shortstop in 1976.  In 1977, Harrah moved to third base after the Rangers acquired Bert Campaneris and had his finest season with a career-high 27 home runs and 27 stolen bases and an American League leading 109 walks.  Harrah was traded to the Cleveland Indians for Buddy Bell in 1979.  He would later be selected to the All-Star Game in 1982.  Harrah played briefly for the New York Yankees after he was traded.  Attempting to replace a popular Craig Nettles at third place, Harrah slumped at the plate and was later replaced by rookie Mike Pagliarulo.  Harrah returned to Texas in 1985 and played second baseman, alongside Buddy Bell.  Harrah played his final game in 1986.

Toby Harrah has the distinction of being the last active player to have played for the Washington Senators after Jeff Burroughs had retired in 1985.

Harrah was also the last player to see a pitch in their final game on September 30, 1971. He was at-bat when Tommy McCraw was caught stealing for the final out in the bottom of the 8th inning.  Fans stormed the field with two outs in the top of the 9th and the Senators were forced to forfeit the game to the Yankees.

Harrah was also involved in three of the most unusual feats in Major League Baseball.
Harrah currently works as a hitter coordinator for the Detroit Tigers. 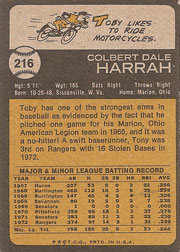