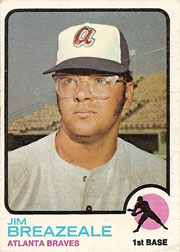 About This Player
Jim Breazeale spent most of his playing career in the minor leagues with a few brief stints in the Majors.  Breazeale was drafted in the first round of the 1968 amateur draft.  He made his big league debut in 1969 at the age of 19 and played in three games that season.  He returned to the big leagues in 1971 and played in ten games.  Breazeale remained on the Braves' roster for the entire 1972 season used primarily as a pinch hitter and a backup first baseman.  Breazeale would remain in the minors until 1978 when he was drafted by the White Sox in the Rule 5 draft.  He would see only minor playing time with the White Sox.

About This Card
The cartoon states that Jim Breazeale is the backup first baseman to Hank Aaron.  Breazeale played 16 games at first base and was used more often as a pinch hitter.  Teammate, Orlando Cepeda, played more at first, 22 games, before he was traded to the A's.

This card is Breazeale's only Topps card. 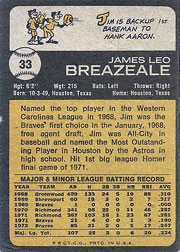