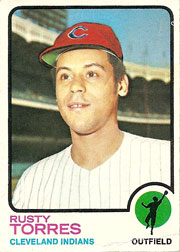 About This Player
Rusty Torres enjoyed nine seasons in the Major Leagues with the Yankees, Indians, Angels, White Sox and Royals.

Torres also has the unique distinction of playing in three games that resulted in forfeits: the final Washington Senators game in 1971, Rangers' Ten-Cent Beer Night in 1974 and White Sox' Disco Demolition in 1975.  Torres describes his experience from the first forfeit on the Bronx Banter blog:


"It just so happens that I was supposed to hit [in the ninth inning]. Bobby Murcer hits a ground ball. He gets thrown at first. They thought it was three outs. It was only two outs. And they rushed us! They rushed the field. They took dirt. People were taking dirt, taking the bases. They were tearing up the seats. It was unbelievable. That was a real scary experience." - Rusty Torres

Currently, Torres is the president and a founder of Winning Beyond Winning, a charity organization that prepares athletes for their careers after their sports participation and provides outreach to school-aged children on the benefits of healthy living that can be achieved through participation in sports.

About This Card
On the front, another airbrushing job from Topps.  Just as with many of the photographs in the set, this one also takes place in Yankee Stadium.  The Indians hat is added even though the Yankee home pinstripes remain.

On the back, as the cartoon on the back of the card states, Torres did play on the same Brooklyn youth team that Sandy Koufax and Joe Torre has also played, though not at the same time. 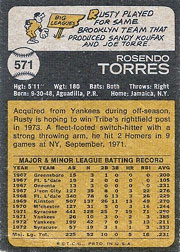