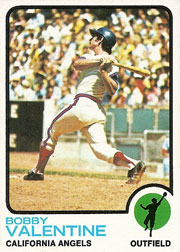 Valentine was traded to the Angels in 1973, though his season was shortened from a multiple compound leg fracture when his spikes got caught in the chain link fence at Anaheim Stadium while attempting to catch a home run ball hit by Dick Green.  Though the injury robbed him of his speed, Valentine returned the following season and played in 117 games and made 414 plate appearances, the second most of his career.

Just before the end of the 1975 season, Valentine was traded to the Padres.  On June 15, 1977, Valentine, along with pitcher Paul Siebert, were traded to the Mets for Dave Kingman as part of "Saturday Night Massacre."  On that night, Tom Seaver was also traded to the Reds for four players and Mike Phillips was traded for Joel Youngblood.  To make room on the roster for the new players, player-manager Joe Torre retired as a player.

Valentine's playing time was limited with the Mets and we was released just before the 1979 season.  He signed with the Mariners shortly after and finished his playing career in Seattle.

Valentine might be better known in baseball circles as a Major League manager.  Valentine managed the Rangers for eight seasons and managed the Mets for seven seasons, which include a National League Championship in 2000.  He has also been successful as a manager in Japan with a Pacific League Championship in 2005 with the Chiba Lotte Marines.  Currently, Valentine serves as a color analyst for ESPN.

About This Card
Bobby Valentine played the entire 1972 season with the Dodgers.  As such, here is another example of a picture having been airbrush with the stripes on the pants, the red color over the stirrups and the "Dodgers" whited out of the jersey.  Still you can see a trace of Dodger blue in the shirt underneath the jersey. 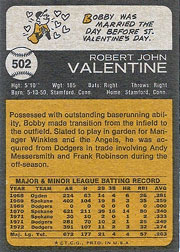