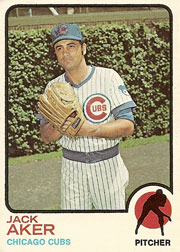 About This Player
Jack Aker pitched in relief in 11 big league seasons with six different teams.  Originally signed by the Kansas City Athletics as an outfielder, Aker was converted as a pitcher and made his Major League debut in 1964.  Aker's finest season came in 1966 in which he pitched to a record of 8-4 with a 1.99 ERA, earned 32 saves and was named the American League Fireman of the Year by the Sporting News.

After several run-ins with A's owner, Charlie Finley, Aker, the team's union representative was made available for the expansion draft for the 1969 season and was selected by the Seattle Pilots.  Aker was soon elected as the Pilots' union rep.  Aker earn the save in the Pilots' first game in franchise history.  In the middle of the season, Aker was traded to the Yankees.  Akers remained with the team until he was traded to the Cubs in 1972 to complete a trade for Johnny Callison.  Aker remained with the Cubs through 1973.  In 1974, Aker played for the Braves and Mets until retiring his baseball career.

Aker managed in the minor leagues from 1975-1985 and served as the Indians' pitching coach from 1985 through 1987.  In 1988, Aker left professional baseball and founded Jack Aker Baseball, Inc. offering camps, clinics and private instruction to children.  Aker devotes a lot of his work at teaching at-risk Native American youth on reservations in Arizona and New Mexico.  In 1997, Aker was honored by President Clinton with the "Giant Steps Award" for his service.

About This Card
Jack Aker was given the nickname "Chief" because of his American Indian heritage. 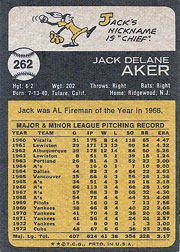