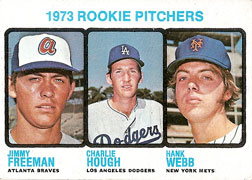 About These Players
Jimmy Freeman pitched very briefly with the Braves: 19 games in 1971 and 1972.  Otherwise, Freeman spent eight years in the minors before and after his short call up.

Hank Webb spent six seasons in the Majors, although bouncing in and out of the minors throughout his career.  Webb made his best league debut with the Mets in 1972.  His best season was in 1975 in which he pitched 115 innings with 7-6 record and 4.07 ERA.  Webb final in his final big league season in 1977 with the Dodgers.

About This Card
Charlie Hough is the last player from this set to retire and one of two players in this set who appears in his last regular-issue Topps card as late as 1994.  (Nolan Ryan also appears in the 1994 Topps set.)

Freeman and Webb both appear for their first time in a Topps set in 1973.  Hough previous appears in the 1972 set. 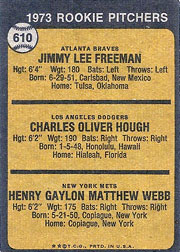