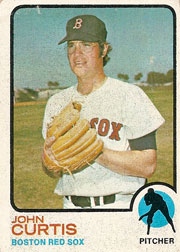 About This Player
John Curtis pitched in 15 Major League seasons.  After a phenomenal collegiate career at Clemson University, where he hurled three no-hitters and went undefeated as a freshman, Curtis was drafted as the 10th overall pick by the Red Sox in 1968.  Curtis made his big league debut in 1970 in a relief appearance, his only Major League appearance that year.  Curtis would become a journeyman pitcher playing four seasons with the Red Sox and three seasons each with the Cardinals, Giants, Padres and Angels.

After retiring as a player, Curtis worked as an editor and freelance writer with articles appearing in the Boston Globe, San Francisco Chronicle and Sports Illustrated.  In 2000, Curtis returned to the game as a minor league pitching coach.  He is currently the pitching coach for the Huntsville Stars in the A's organization.

About This Card
This particular card in my collection is covered with black speckles.  I don't know much about the printing process in 1973, but I guess it must have been in an overused black printing plate or on an overused roller. 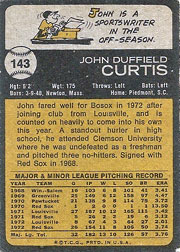