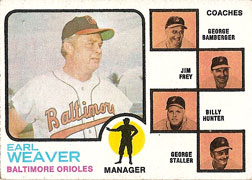 About This Manager
Earl Weaver spent 17 seasons as manager of the Baltimore Orioles.  During his tenure, the Orioles won four American League Championship and the World Series in 1970.  In addition to his winning success, Weaver is known for his managerial philosophy and tactics.  His oft-quoted philosophy was "Double-Plays and the Three Run Homer" and instead of using aggressive tactics such as the stolen base, hit and run or sacrifice bunt, preferred waiting for the home run.  Weaver made extensive use of statistics to create favorable matchups for his pitchers and batters and to take advantage of his bench effectively.

Weaver's number 4 was retired by the Baltimore Orioles in 1982 and he was inducted into the Baseball Hall of Fame in 1996. 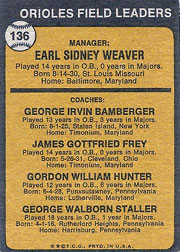