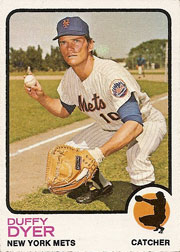 About This Player
Duffy Dyer spent 14 seasons as a catcher with the Mets, Pirates, Expos and Tigers.  Prior to his professional baseball career, Duffy Dyer was a member of the Arizona State University baseball team, alongside Sal Bando and Rick Monday, that won the 1965 College World Series.

The Mets drafted Dyer the following year as their number one pick.  He made his Major League debut to start one game in 1968.  Dyer returned to the big leagues again in 1969 and made one pinch hit appearance in the 1969 World Series.  Dyer was established as the Mets' backup catcher the next season and served as the back up to Jerry Grote through 1974.

Dyer was traded to the Pirates for Gene Clines the next season and served as the back up to Manny Sanguillen in 1975 and 1976.  After Sanguillen was traded to the A's, Dyer platooned with Ed Ott at catcher in 1977 and 1978.  Dyer played with the Expos in 1979 as a backup to Gary Carter and with the Tigers in 1980 as a backup to Lance Parrish.  Dyer played two games for the Tigers in 1981 before he was released.

Since the end of his playing career, Dyer has served as a coach, manager and scout at about every level of professional baseball.

About This Card
The back of the card states that Duffy Dyer took over the starting job in 1972.  In truth, Dyer played more games that season because of injuries that starting catcher, Jerry Grote, was suffering that year.  However, the opportunity allowed Dyer to show off his defensive prowess.  Dyer led the National League in his position at range factor and caught stealing, 2nd in assists, 3rd in fielding percentage and 4th in putouts. 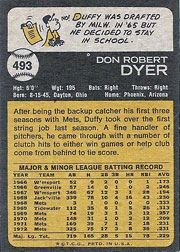