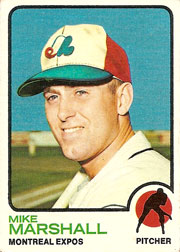 About This Player
Mike Marshall pitched in 14 Major League seasons with nine different teams.  Marshall made his big league debut in 1967 with the Tigers.  Marshall established himself as one of baseball's top relievers after he was traded to the Expos for Don Bosch in 1970.  In his four seasons with the Expos, Marshall had a 2.94 ERA and led the National League three times in games finished and one time in saves.  Marshall was traded in 1974 to the Dodgers for Willie Davis and went on to pitch a career year with 2.42 ERA, a league leading 21 saves and current Major League record for games pitched in one season (106), relief innings pitched (208.1) and consecutive games for a pitcher (13) on the way to his first All-Star selection and a Cy Young Award.  Throughout his career, Marshall would lead the league in games pitched four times, games finished five times, saves three times and receive two All-Star selections.

Marshall attended Michigan State University and earned a doctorate in exercise physiology.  Marshall teaches and advocates a pitching method he developed that he believes could completely eradicate all pitching injuries.  After his rookie season, in which his poor delivery caused him shoulder pains, Marshall studied tapes, analyzed himself and adjusted and refined his pitching motion.  He credits this method as the reason for his longevity throughout the season and throughout his career.

I'm a researcher. People forget that about me. That's where my heart is. I pitched baseball, really, as the lab experiment of my research to see if it worked. Turned out it did. I don't need any more validation that I know something about baseball.  - Mike Marshall

Marshall had also diagnosed Tommy John with a torn ulnar-collateral ligament that led to his surgery and suggested a regimen, which included exercises with an iron ball, strengthened his arm to allow John to pitch another 13 seasons.  Marshall currently runs a pitching academy where he teaching his pitching methods.

About This Card
While this card is not Marshall's last Topps card, this is the last card in which he posed for a picture.  The legend is that at one time, Marshall quit posing for pictures for Topps.  Topps, afterwards, had to use in-game action photos for his subsequent cards (with the exception of his 1974 Topps Traded card which used this photograph with an airbrushed Dodgers cap.)  Eventually, Topps quit including Marshall as part of its set.  Marshall last appeared in a Topps set in 1977 even though he continued to pitch through 1981. 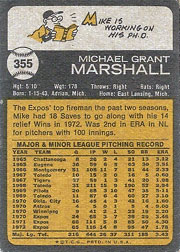