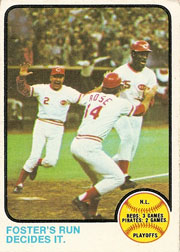 About This Playoff Series
The 1972 National League Championship Series paired the Pittsburgh Pirates against the Cincinnati Reds.  In a five-game series, the first two games were played in Three Rivers Stadium and the final three at Riverfront Stadium.  This series went back and forth through the first four game until the pinnacle of the match in the final game.  This series would also be the last on-field appearance of Roberto Clemente.

Game 5 would prove to be one of the most memorable games in postseason history.  The Pirates took the early 2-0 lead with an doubel from Richie Hebner to score Manny Sanguillen and a single right after from Dave Cash to score Hebner.  The Reds would drive in a run in the third inning off of a double from Pete Rose to score Darrel Chaney.  Reds starting pitcher, Don Gullett would be knocked out of the game at the beginning of the 4th inning and Cash would single to score Sanguillen.  Cesar Geronimo would hit a home run in the 5th inning off of Pirates starter, Steve Blass, to cut the Pittsburgh lead at 3-2.

However, the Pirates brought in closer, Dave Guisti in the bottom of the 9th and Pittsburgh would collapse.  Johnny Bench hit a lead off home run tie the game.  Right after, Guisti gave us consecutive hits to Tony Perez and Denis Menke.  George Foster was brought in to pinch-run for Perez and Bob Moose was brought in to relieve Guisti.  Foster would advance to third base on a sacrifice fly from Geronimo.  Moose would retire Chaney with a pop up for the second out.  With pinch-hitter, Hal McRae, at the place, Moose would throw a wild pitch and Foster would score the winning run to end the game and advance the Cincinnati Reds to the World Series.

About This Card
The photograph shows the final play of the series: George Foster after scoring the winning run with Pete Rose and third base coach, Alex Grammas, out to congratulate. 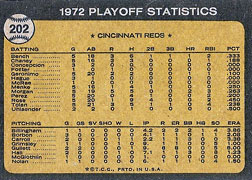