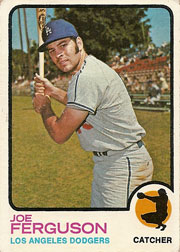 About This Player
Joe Ferguson spent 14 seasons as a Major League catcher and right fielder and 11 of them with the Los Angeles Dodgers.  Ferguson made his big league debut with the Dodgers in 1970 and bounced in and out of the minors through 1972.

Ferguson played his first full season with the Dodgers in 1973.  That year, he was the starting catcher and had his finest season hitting .263 with 25 home runs and 88 RBI and led the National League in sacrifice flies.  Ferguson also provided to be a defensive asset by leading the league on fielding percentage for a catcher and setting a Major League record for fewest errors by a catcher in a season.

The following year, Steve Yeager took over the majority of the catching duties and Ferguson split time at catcher and right field.  While Ferguson was known for his strong arm behind the plate, he used it well in right.  In the 8th inning of Game 1 of the 1974 World Series with Sal Bando on third ready to tag up, Reggie Jackson hit a fly ball to center field as Jim Wynn camped under it.  Charging from right field, Ferguson cut in front of Wynn to catch the ball and heaved the throw to the Yeager to get Bando out at home.  In Game 2, Ferguson hit a two-run homer off of A's pitcher, Vida Blue, to give the Dodgers their only win in the series.

Ferguson was later traded to the Cardinals in 1976, to the Astros in 1977 and back to the Dodgers in 1978.  He was released by the Dodgers in 1981 and signed by the Angels, with whom he would play two more seasons before his final game in 1983.

After his playing days had ended, Ferguson had coached at various levels of professional baseball.

About This Card
While the 1973 card was only his second card, Topps alludes to an early event that could have possibly lead to a prestigious career.  In 1971, Ferguson hit a 9th inning home run against Luke Walker to spoil his chance to become the first Pirate pitcher to throw a no-hitter. 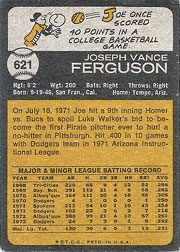