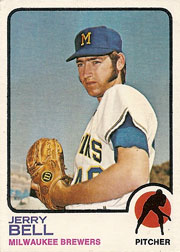 About This Player
Jerry Bell enjoyed a brief four-year career with the Brewers.  Bell was drafted by the Seattle Pilot in 1969 and made his big league debut in 1971 after the team had moved to Milwaukee.  Bell was named the Brewers' Rookie Pitcher of the Year in 1972.  Bell spent most of his career as a spot starter and reliever, although he started 25 games in 1973.  Bell would pitch his last game at the Major League level on May 15, 1974 and finish the season in the minors.  Bell pitched the entire 1975 season in the minors before retiring his playing career.

Jerry Bell currently works as a coach with Training Camp for Athletes in La Vergne, Tennessee. 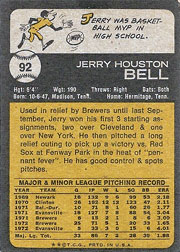