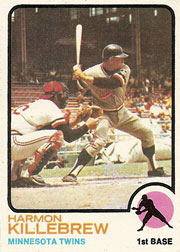 About This Player
Harmon Killebrew enjoyed 22 season in the Major Leagues and played all but one season with the Washington Senators/Minnesota Twins organization.  The Senators signed Killebrew right out of high school and made his big league debut in 1954.  Killebrew established himself as a superstar in 1959 when he hit 42 home runs and drove in 105 runs and earn his first All-Star selection.  When Killebrew moved to Minnesota, he became the face of the Twins' franchise for many years, including a World Series in 1965 and two American League Championship Series in 1970 and 1971.  One of baseball's premier sluggers, Killebrew led the American League in home runs six times and in RBI three times.  He has eight seasons with at least 40 home runs, a feat surpassed only by Babe Ruth.  He ranked 5th all-time on the home run list at the time of his retirement.  Killebrew was also selected as the American League Most Valuable Player in 1969.  Killebrew played his final season with the Kansas City Royals before retiring in 1975.

Harmon Killebrew passed away this morning from cancer at the age of 74.

About This Card
This card might be the first card I bought from the 1973 Topps set and not because I was trying to build the set.

Although I had never seen Mr. Killebrew play, I was fortunate to have met him.  I met him at an autograph signing in 1999 where he signed an Official Rawling ball for me.  (I was in college at the time.)  One thing that amazed me about him that day was that, despite the long line, he took time to talk to every single person in line and I had a chance to talk with him for a short moment while he signed for me.  While I had met other players for autograph, his was my first on a baseball.  After that day, I started buying vintage Killebrew cards for my personal Twins collection, including this one.

Mr. Killebrew's great feats on the diamond was only surpassed by his great character.  Today is a somber day in Minnesota and he will be missed. 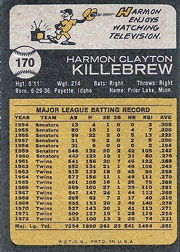