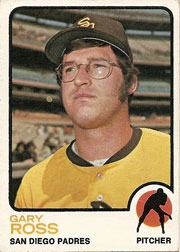 About This Player
Gary Ross enjoyed ten big league seasons and six of them with the San Diego Padres.  Ross was drafted by the Chicago Cubs and made his Major League debut in 1968.  Ross was traded, along with Joe Niekro, in the middle of the 1969 season to the Padres for Dick Selma.  Ross enjoyed his finest season in 1972 in which he pitched in 60 games (ranking 4th in the National League) with a 4-3 record, 3 saves and a 2.45 ERA.  Ross was traded in the last month of the 1975 season to the Angels for Bobby Valentine.

About This Card
This card shows the standard portrait shot. 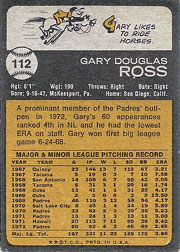