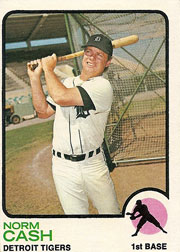 About This Player
Norm Cash enjoyed 17 seasons in the Major Leagues with his big league debut in 1958.  While Cash played his first two seasons with the White Sox, his career catapulted when he joined the Tigers in 1960.  Also known as "Stormin' Norman", Cash established himself as the team's starting first baseman.  His finest season came in 1961 in which he led the American League in hits (193), batting average (.361), on-base percentage (.487) and OPS (1.148) and was selected as an All-Star for the first of four times.  Cash had the highest season batting average of any player during the 1960's, but was overshadowed by Roger Maris' historic home run chase.  Cash never had numbers close to his 1961 season, but continued to remain an offensive force and a four-time All-Star for the Tigers for many years after.  At the time he was released by the Tigers in 1974, Cash ranked fourth in home runs among left-handed hitters and ranked second in home runs in franchise history.

Cash was also known for his sense of humor in the game.  Late in Nolan Ryan's 1973 no-hit game against the Tigers, Cash brought out a sawed-off table leg to the plate instead of a bat.  When asked by the umpire, Cash said, "Why not, I won't hit him anyway."

Cash drowned in an accident off Beaver Island in northern Lake Michigan on October 12, 1986 when he slipped while aboard a boat, fell and struck his head.

About This Card
Teammate, Jim Northrup, described Cash as someone who "lived to play baseball" and that certainly shows in this photograph. 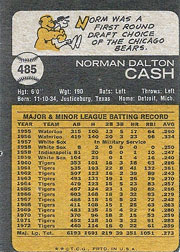